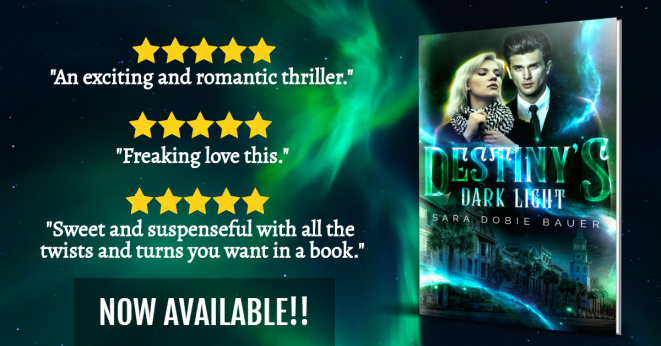 “This is going to sound odd, I assume, but are you witches?”

(Ohhhh, poor Liam. This sexy Irishman has no idea what he’s gotten himself into.)

Destiny’s Dark Light, my witchy Southern romance, is out TODAY from Pen and Kink Publishing. It’s time to meet the charmingly befuddled Liam and prophesied super witch Cyan. Can their destined love survive a war?

In modern day Charleston, two fated lovers meet at the beginning of a world-ending witch war…

Cyan Burroughs is a lonely light witch prophesied to battle the dreaded Dorcha—a dark sorcerer with the power to rule the world. There’s one problem: Cyan doesn’t have any powers of her own.

An unknown witch flips a trolley and causes mass carnage, and Cyan’s dormant magic awakens. When she drags handsome Irishman Liam Cody from the wreckage, she recognizes his face from her aunt’s psychic portraits. He is the man Cyan is destined to love.

As she and her magical family seek to unveil the murderous witch who caused the accident, Cyan and Liam grow closer, but Liam’s mysterious past is not the only thing keeping them apart.

Dark witches and light will soon fight to the death, and Cyan must face her calling. How can she protect Liam and win the war when her immense powers are barely under control?

Why is this dark romance set in Charleston, SC?

Many thanks to Pen and Kink Publishing for loving this book and giving it a happy home.

As Halloween creeps ever closer, this is the perfect time of year to curl up with some pumpkin coffee (or, better yet, pumpkin beer) and read a spooky book by the fire. (Destiny’s Dark Light comes to mind.)

One thought on ““Are you witches?””