Beth Cato writes about wild adventures on airships. She writes about mechanical gremlins and sexy (sexy) stewards with long hair. She is a Steampunk Goddess. She is also soft-spoken, beautiful, and fond of spending time with neurotic other writers, namely me.

Our husbands set Beth and I up on a blind date over a year ago, because we were both “artists.” We fell into friendship easily, because indeed, we were both “artists” with quite a lot in common (including a love for British TV). When the news came that her debut, The Clockwork Dagger, had been picked up by Harper Voyager, I was one of the first to hear … and REJOICE! I mean, seriously, if there ever was a reason for celebration!

The Clockwork Dagger will be published September 16, but because I “know people” (um, Beth), I got a look at an ARC. My full review will be posted Thursday, but in the meantime, take a gander behind the red curtain and learn more about a girl who’s about to take steampunk by storm.

How did you come up with the world of Clockwork Dagger?

A number of years ago, I wrote a steampunk story I was unable to sell. A while later, I was trying to figure out a new novel concept and I hit on the idea of doing Agatha Christie’s Murder on the Orient Express, but on an airship with a healer as the main character. I decided to use the same world from that old short story, though I had barely developed it there. The characters from that story do show up briefly in my novel as well.

Who is your favorite character in your novel?

Oh, that’s such a hard question. I have to say Mrs. Stout. She’s inspired by one of my favorite television characters of all time, Mrs. Slocombe on the British comedy Are You Being Served? Mrs. Stout is a fifty-something woman with a loud voice, loud hair, and loud clothes, but as vibrant as she is, she carries some terrible secrets. She’s so over-the-top with her mannerisms that she’s a delight to write. 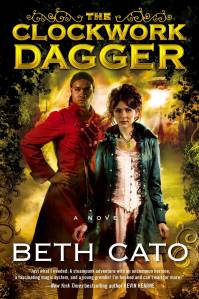 What is the best thing about being a writer? Worst thing?

Best thing, no question, is seeing people react emotionally to my writing. If I can make someone cry or feel angry or cheer out loud, it’s the most amazing thing in the world. The worst thing … rejection. Always rejection. Soon enough, I’ll have that in the form of harsh reader reviews, too. I fear my skin will never be thick enough to deal well with that.

Where have you felt most inspired?

I took a cruise to Alaska last summer. One morning, our ship traveled through the fjords to view a glacier. I sat by our open balcony door and wrote in my journal and read a book. We then did a day trip by bus and train from Skagway up into British Columbia. I breathed in that crisp air, as if I could store it in my lungs as long as possible. I knew I needed to write about characters going to these places. In my next book, I hope to do just that, though it will be hard for words to do justice to that wild beauty.

When (if ever) have you wanted to give up on writing?

I have an urban fantasy novel that I wrote and rewrote and wrote again. It was near and dear to my heart. The problem was, I worked on it for ages but I never had anyone critique it an an early stage. When that finally happened, the feedback was devastating. The book, quite simply, did not work. You can’t accept all critiques (some people are just plain wrong) but I knew this person was right.

I spent about three days in a horrible depression. I could barely eat or sleep. I really debated if I should completely give up, but then the next question was, “What am I going to do if I don’t write?” I couldn’t think of anything else. So, I figured, I need to fix this book. I need to prove I can write. I tore the novel apart. I rewrote it yet again. I had it critiqued by a whole group of people. Six months later, that novel is what snared my literary agent.

Adding magic and mythological creatures in with history makes things fresh. I made things a little easier on myself by setting the novel off Earth, so I didn’t need to rely on strict historical details, though a lot of World War I-era research still went into it. I had the chance to think about so many what-ifs: “What if battlefield medical wards could use healing magic alongside standard surgery? What could limit that magic? What if your enemy in trench warfare had fire magic … and airships?”

Airships in particular are a trademark of steampunk. I was obsessive about making them as realistic as possible. I based the principal airship in my book on the infamous Hindenburg, down to the room descriptions and the angles of the promenade windows. For me, those historical details make it more real and believable, even with the heavy reliance on magic. Plus, it’s just plain fun to write and to read!

Learn more about Beth at http://www.bethcato.com, and look forward to my review of The Clockwork Dagger Thursday!