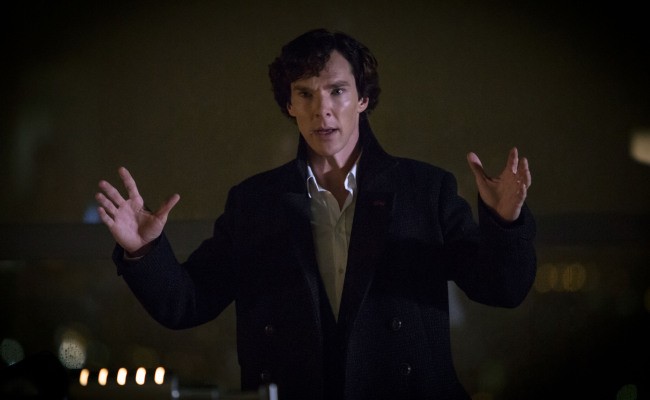 THERE BE SPOILERS HERE! IF YOU HAVEN’T WATCHED ALL OF SHERLOCK SEASON THREE, DO NOT READ. YOU HAVE BEEN WARNED.

Episode One: The Empty Hearse

We all wanted to know how Sherlock survived the dive from St. Bart’s. Within the first three minutes of season three, we get an idea via an action-movie style montage including a bungee chord, a hair ruffle, and a sexy smooch. I loved this opening. Completely unbelievable and hilarious, and of course, it was a mere flight of fancy from Anderson.

The tempo of this episode was a little off, but I forgive, especially because of Martin Freeman’s face when he realizes Sherlock is alive and standing at his dinner table. Priceless, followed by several punches to the face. We also get to meet Sherlock’s parents, played by Cumberbatch’s real mum and dad. Adorable. We meet Mary, Watson’s soon to be wife. There was even a Sherlock and Moriarty almost-kiss—which begs the question, what the hell really happened on that roof at the end of season two?

I don’t think the truth was made clear, but I do think this was done on purpose. Co-creators Moffat and Gatiss knew how many theories there were, so they gave us three, the third of which being the most likely—but nothing is for sure. Did I feel a little cheated by this hedging? Perhaps, but this episode felt more about character than plot. They made Sherlock softer, almost a real human being, and this theme of Sherlock’s sentimentality stretched the whole third season.

An episode about a wedding but not necessarily a detective. I call this episode “odd,” but I enjoyed it because I like odd things (like Benedict Cumberbatch’s face, for instance).

Highlights included John asking Sherlock to be his best man, after which, Sherlock resembles a frozen computer screen; comedy gold. Speaking of, the stag night within which the boys get horribly drunk and try to solve a case. Instead, Sherlock passes out on a floor, vomits, and they both end up in jail. Finally, dear Janine the bridesmaid falls for Sherlock. (Janine: “Do you always carry handcuffs?” Sherlock: “Down girl.”)

So Mary and John are married, and the grand finale: they’re expecting a baby! I really enjoyed the dialogue and back and forth. True, not too much of a mystery here, but one hell of an adorable best man speech from Sherlock and lots of laughs. Which prepared us for …

Well, this one wasn’t very funny at all, was it? And yet it’s one of my favorite episodes of the series. We meet the odious Charles Augustus Magnussen (CAM), who actually accomplishes a face lick without being silly. He is the man Sherlock hates the most and must bring tumbling down.

First off, Sherlock has a girlfriend in this episode—Janine, of course, from the wedding, which is just so, so awkward. I knew something wasn’t right; we all did. We soon find out he’s only dating her to get to CAM. He even proposes to her to get into CAM’s office, which is when …

MARY SHOOTS HIM! MARY! Yeah, John’s wife is some sort of super killer assassin person. That was shocking, yes, but I must say, the entire sequence inside Sherlock’s mind as he fights to stay alive was fan-freaking-tastic. It even featured Moriarty, who I love, but really, amazing, amazing sequence. Gorgeous. So well done.

In the end, Sherlock survives the bullet wound and John forgives his wife. The coup de gras: Sherlock murders CAM, and there’s a sweet goodbye between John and Sherlock as Sherlock goes off to die in East Europe on some undercover assignment. But then … but then …

MORIARTY IS ALIVE!!!!!! Sherlock gets called back to London!! Closing credits!!!

My brain exploded—almost. Would have been a hell of a mess. But this whole Moriarty thing raises so many questions. For instance, what about the body on the roof from season two? Someone must have known Moriarty was not dead, and my money is on Mycroft. Maybe Mycroft was hiding Moriarty (God knows why), and with Sherlock’s life in peril, he brought Moriarty back to life?

Well, the speculation now begins, as we are on hiatus—again. Weren’t we just on hiatus? Yes. Yes, we were, and we’re back, and who knows when we’ll get season four? But I’m sated, for now, and it’s a good thing; I’ve been Sherlock-obsessed for months. Time to get back to real life. But take heart: Moriarty lives.