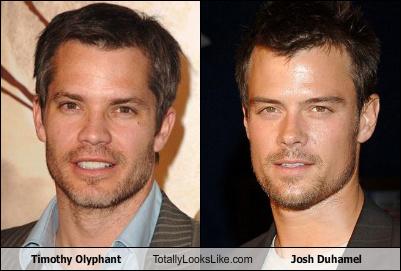 In case you were wondering, Josh Duhamel is not Timothy Olyphant. Timothy Olyphant is not, actually, Josh Duhamel. They are two separate actors who act in separate films. I mean to clarify this because I was not aware—until recently—that there was two of them. I thought they were the same person, which is naïve, in hindsight, since one of them has Clint Eastwood potential, while the other … well, the other belongs in a chick flick.

Case in point—
Duhamel vs. Olyphant
All My Children vs. Deadwood
Win a Date with Tad Hamilton vs. Hitman
When in Rome vs. Justified

Now, can you tell them apart?

Timothy Olyphant, as I said, is new to me, considering for a long time, I thought he was Josh Duhamel. Once I realized the difference, I also realized they’re super-duper different dudes. The first time I realized Tim Olyphant was himself was in Live Free or Die Hard, and he played an excellent bad guy. Then, I started watching the FX show Justified, and he plays an excellent bad ASS, as well. Justified is a great show—a cowboy/US Marshall/bad vs. good weekly, and it’s the show that made me believe good ol’ Timmy has some Clint Eastwood going on. I would suggest watching it. I would also suggest The Crazies.

The storyline is simple, and reads like a zombie flick: “The inhabitants of a small Iowa town are suddenly plagued by insanity and then death after a mysterious toxin contaminates their water supply.” I remember seeing previews for this and thinking, “Uh-uh, I don’t think so. That movie looks messed up.” And it is messed up … but excellent. The creepy stuff starts right away, which I love in horror movies. A “crazy” shows up at a baseball game, and the town Sherriff, played by ass-kickin’ Tim Olyphant, has to take him down. Things get weirder and weirder from there, as Olyphant, his deputy, and his wife, have to watch their neighbors slowly becoming homicidal monsters before their eyes.

This is not only an eerie movie, but it’s a scary movie. I even screamed once (which of course made Jake laugh and point). There are a dozen jump scenes that’ll have you falling on your own living room floor, and there’s a lot of gore—zombie movie gore. I guess I shouldn’t be at all surprised that this is a remake of a 1970s George Romero gore fest of the same title. In fact, it has plenty of zombie movie stereotypes: the fear of becoming one of “the crazies;” military infiltration to combat the “crazies;” and even me, yelling “You’re being DUMB! What the hell are you doing? AHHHH!” at my TV screen. And just as the creepy stuff starts right away, it never stops. You will have heightened blood pressure for days after this movie, plus you’ll be afraid to get up and go to the bathroom at night because you’ll swear there’s something hiding in the dark.

And that, my friends, is what a real horror movie is supposed to do.

8 thoughts on “The Crazies”